This site is an archive of the work that I have completed as part of ENG101 at Emory University during spring semester of 2018. Several learning outcomes were attributed to this course. We developed our ability to frame rhetorical compositions through experimentation with different organizational frameworks. Adoption of generic and stylistic rhetoric allowed us to further develop these skills. These skills were put to use during the black-out poetry assignment, in which we took preexisting rhetoric and framed it into our own personalized composition. This course also exercised critical thinking and reading, which subsequently resulted in writing. With the Tracing Maus assignment, we were tasked with tracing individual pages from the text. Afterward, we annotated the pages as a means of close-reading to draw conclusions from the traced pages. This methodical process allowed me to perceive certain details within the comics that I had previously overlooked. Our assignments also branded writing as a multistage process. Through close-reading, research, drafting, revising and peer-revising, I came to recognize the value in perceiving writing as a process and not simply as a one-dimensional task. One of our first assignments, the Literacy Narrative, involved recounting how we initially learned to read and write. We approached this assignment by breaking it up into pieces: beginning with a draft, followed by peer-revisions to form a second draft. We also drafted our comics and received feedback from our classmates to assure consistencies in our storylines. Lastly, we developed our final comics which merged our illustrations with our preexisting narrative.

In reflecting on this process, I recalled how difficult it was for me to conceptualize exactly how I learned to read and write;

“and not because it was difficult to recall events that took place so many years ago, but because it is hard to articulate learning a skill that is now so natural and habitual to me. It’s like describing how I learned to ride a bike. Which, after some thought, essentially boiled down to a trial-and-error process of falling down and getting back up.” 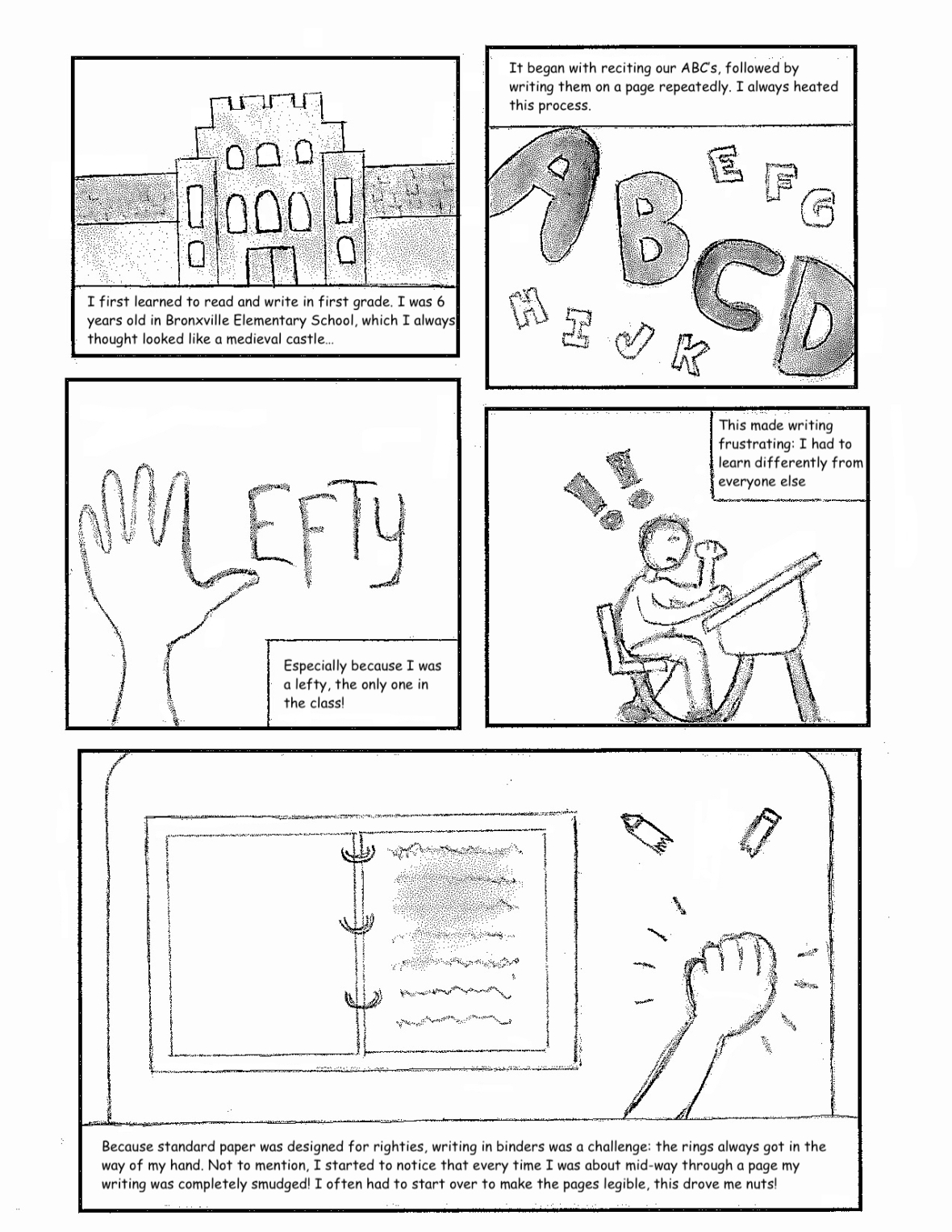 I noticed that bringing conscious thought to how I had thought and learned allowed for a deeper understanding of my identity as a writer. Through the process of editing and revising I developed an affinity for metaphorical storytelling. In other words, being less literal and being more figurative. With this assignment setting the tone for the remainder of the course, writing was no longer “tell what happened,” but “show what happened,” and “know why it happened that way.” In Comparing Pyongyang in Palestine, a vignette within Pyongyang by Guy Deslisle, portrayed Delisle lying on a hotel bed with shoes on. He describes “breaking this family taboo” as “blissful.” During analysis, I recognized that this vignette, does not necessarily advance the narrative, but does serve as a portrayal of Guy Delisle and the unideal circumstances of his environment:

“Perhaps he describes this trivial action as blissful because it embodies an escape from the harsh and unrelenting conditions of the North Korean regime. Maybe it is refreshing to “break a rule” in a world so stringent that violating certain rules can result in capital punishment. Only in privacy can Delisle remain undetected by the perpetual scrutiny of North Korea’s regime, and in that sense, doing something as trivial as breaking a family taboo can be blissful.”

This indirect mode of storytelling is a narrative style utilized by Delisle throughout Pyongyang. Delisle could have simply expressed “I thought of my hotel room as a sanctuary from the watchful eyes of the North Korean regime,” but that approach would be overly simplistic and make for poor story-telling. Rather, he describes actions which indirectly imply a certain feeling.

Throughout the course, I was surprised by how much the assignments challenged me, as I generally think of myself as a pretty strong writer. Yet, when I think of a typical English course and conventional writing assignments, five paragraph essays and book reports come to mind. The assignments in this course did not conform to that typical framework.

Visual writing practices were completely foreign to me. Drawing is something I used to enjoy, but it was largely absent in my high school and college curriculum. So the idea of revisiting drawing and sketching was refreshing, though certainly still challenging. One of my favorite drawings came from the Christopher Niemann’s, “Sunday Sketches” assignment, during which we were tasked to incorporate physical objects into our sketches. I thought that supplementing a flat drawing with a three-dimensional object made for an interesting visual. My rendition of these sketches, Elephant R&B assimilated a pair of blue earbuds into a drawing of an elephant: creating the illusion of eyes.

Another unique component to this class was reflection writing. I had completed “reading reflections” before, but that typically entailed summarizing text. These reflections involved re-visiting our initial thought process and explaining how we arrived at our finished product. I was not accustomed to this type of writing and will admit that I did not initially see the point in it. But as I wrote more reflection pieces, I began to see patterns take shape. I noticed that the reflections were bringing conscious thought to how I was thinking and problem solving. I think most people can recall when they learned a skill but don’t remember how they learned learned that skill. These thought processes are so fleeting and automatic, that people tend to disregard them. I think reflecting aided me in solidifying what rhetorical tactics worked and which didn’t. The Combophoto assignment involved merging two images to create a new “combined” tertiary image. In reflecting on this assignment, I came to the conclusion that thinking logically and taking a normative approach was not conducive to this assignment. Because this assignment wasn’t logical or normal, it involved abstract concepts. And thus, I would have to change my approach…

With each writing assignment in this course, I found myself getting more and more comfortable with writing personally and authentically. I think most college students have a sort of preexisting “filter” that weeds out certain words, thoughts, or phrases that they deem inadequate to their professor’s expectations. This internal struggle hinders creativity and individuality. This finding is highly reflective of a theme that I uncovered in Tillie Walden’s Spinning. During the Mapping Spinning assignment, I tracked the frequency of Tillie’s time spent on and off the ice. Using this data I created a bar graph to provide a visual representation of the way in which she allocated her time. Analysis of this visual made it apparent that nearly every major development in Tillie’s life happened off the ice. This drew me to the conclusion that Spinning is not in fact about ice skating, but stages of growth in adolescent life:

“Among the most important of these stages being a struggle to discover, accept, and embrace one’s identity. I have gathered that Tillie’s confinement to the ice rink was more or less a metaphor for her inability to embrace her homosexual identity.” In correspondence, an internal struggle presents itself when a writer’s desire to express oneself is abridged by the desire to meet the expectation of the reader. But I find that adhering to the believed expectations of others makes for bland and uninteresting writing. A reader should be able recognize the author in his or her writing. And hence, a writer should prioritize their literary style, and not the style they deem customary.

I originally encountered this course on the Emory Course Atlas, and immediately the title, Visual Writing and Thinking, caught my eye. I try to select courses which will contribute to post-graduate life, and as a student who aspires to work in the advertising industry, it seemed like the perfect match. Several of my encounters with New York advertising agencies have involved a common question, “Do you have a creative portfolio?” The answer to that question is always “no.” But now I have a number of creative elements from this course that I can use to build one. Enjoy!